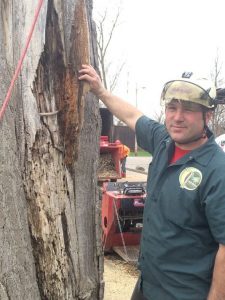 In May, 2015, we made headlines due to a historically old tree in Farmington needing to be removed due to lightning and insect infestation. Check out the article from the Farmington local paper here, or read it below:

Folks who regularly pass by the Huron River Club on Farmington Road might notice the landscape has changed a bit recently.

Gone is the front lawn’s 75-foot cottonwood tree, estimated to be some 115 years old.

On Saturday, workers from True Cut Tree Care took down the tree — the victim of lightning and insect infestation, explained Frank Bankowski.

Bankowski, True Cut’s owner, said as an arborist his goal is usually saving trees, not felling them. But this time, it wasn’t to be.

“The tree was definitely struck by lightning awhile back, and it tried to repair itself but just couldn’t before the insects moved in,” he said.

HRC general manager Laura Fox said the tree had, in fact, been hit by lightning more than once — and was advised that if it happened again the tree could end up tumbling onto the building, parking lot or Freedom Road. And ants had hollowed it out, from the base to at least eight feet up, she added.

“It had to go, for safety reasons,” she said.

Fox said she will have more landscaping added, but hasn’t yet decided on the plans.

Are you satisfied with the work performed by our tree service company?